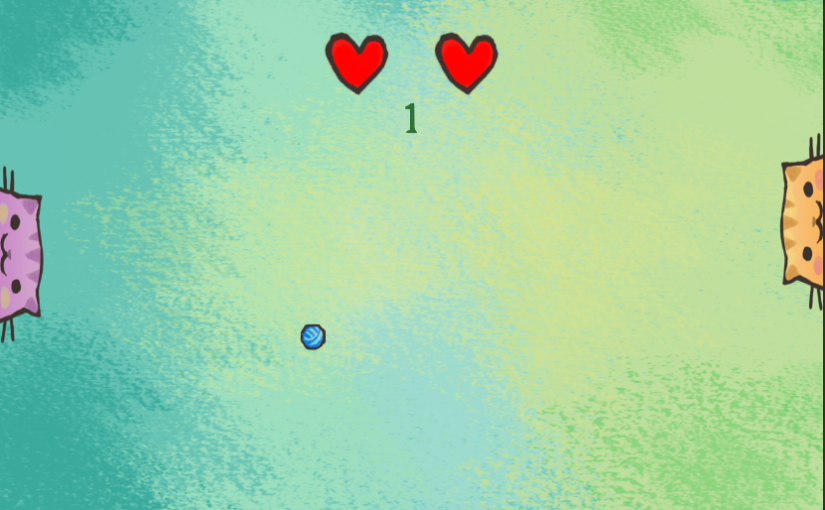 Quite a while ago I decided to introduce my daughter to the world of classic video games. Obviously, the best game to start with was the first video game whatsoever, Pong. However, the Pong implementations I found on the Google Play Store all had some design problems. So I started to implement my own version. The result, Coopong For Kids, is now available in the Play Store. The following article takes a closer look at the main game design decisions involved.

Why yet another Pong?

Searching the Google Play Store you can find more than 100 games with “Pong” in their names. They either clone or vary the classic. So why would the world need another Pong clone? I had two reasons for starting this project.

Coopong For Kids differs from other Pong variants mainly regarding control and the game mode. The necessity became evident when looking at my target audience: female, 5 years old – consisting of one person, but probably applicable to a good portion of this audience in general.

If you take any Pong for mobile devices and start playing, it seems natural to put your finger onto your paddle and start moving it to where the ball can be hit by swiping over your screen. Unfortunately, little children often have sweaty or sticky fingers, or just push too hard onto the screen. As a result, the little finger sticks to the screen, and the paddle does not move quick enough to where it should be. This gets frustrating after a short while and the child quits playing the game.

For this reason, you do not swipe in Coopong For Kids, but tap. In order to move the paddle you tap on the screen where you want it to be, and the paddle moves there at constant speed. The input area for each paddle consists of one half of the screen, making this a very robust form of control. This is not as easy as it sounds as the paddle moves at a certain speed and needs to be set in motion early enough.

As a matter of fact, tapping sometimes works as well in other Pong implementations, but with a different behaviour, i.e. the paddle jumps to the tapped point immediately. Once a player has discovered this, it may completely change the way of playing. Especially if the ball isn’t too fast, it will become trivial to catch it. This, of course, cannot be desired. The game experience should not depend on the way the player uses the implemented controls. Rather than that, the controls should be used the way the game designer intended it. Thus, every player will get the same feel of play the rest of the game was designed around.

Coopong For Kids ist cooperative instead of competitive

Classic Pong is played player versus player. This means it was created for and appeals to a classic, mostly male audience. Girls, on the other hand, do not take as much pleasure in playing competitive games as boys do. This also showed in the first test games I made with Pong variants on my smartphone. My daughter would soon loose interest after she lost her first matches.

The cooperative version was a much bigger success. The two players try to keep the ball in the game for as long as possible. In order to make it challenging, the ball gets faster over time and the paddle shrinks now and then. The players advance a level in regular intervals.

The goal to reach ever higher levels was very motivating for my daughter. On the other hand, it was disappointing for her that she had to start all over again every time she missed the ball. I remedied this by introducing multiple lives, dampening the amount of frustration considerably.

Apart from a well-thought-out game design and a tidy technical implementation a video game also needs to be aesthetically pleasing. Unfortunately, the classic design of Pong does not really fulfill this requirement. I was lucky that a former colleague of mine, Anna Sudermann, agreed to contribute the graphical design for background, ball, and paddles. Starting with the first, very appealing draft in crayon style we got the idea of rewarding the players’ progress with additional, graphical themes, which are unlocked at certain levels.

Originally, Coopong For Kids, like classic Pong, was designed for two players playing together on one smartphone or tablet. To my surprise, my daughter favoured playing the game alone. Be it alone or with two players, the modifications described above transformed simple Pong into a game well-suited for children as a first introduction to video games.

Give it a try! I’d be very happy to get some downloads and comments!