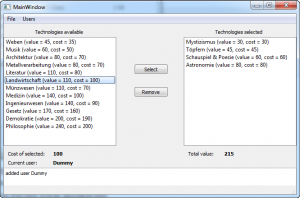 Buying the right civilization cards in Civilization (the board game) is something of a science in itself. Especially considering all the bonuses correctly requires some higher mathematics. My support tool CivCalculator for Windows PCs supports the players while buying civilization cards.

As of today you can download the tool CivCalculator in the download area. Just copy and unpack it on your hard disk and run the .exe file. It should (hopefully) work without greater issues. I implemented the CivCalculator since I wanted to shorten our sessions a little. It was written for my personal use, however, I would not want to keep it from you (please read the Readme file).

The CivCalculator was written for the so-called Gibson variant of Civilization (the German version from publisher “Welt der Spiele”). Therefore, it contains the respective civilization cards in German. Should you want to use the tool for another variant such as Advanced Civilization or in another language you can easily adapt the file “Technologies.xml”.

As far as I know the tool correctly supports all bonus rules except for one: referring to rule 4.3.10 (German rule book) each card can be used only once in each transaction. A transaction contains all civilization cards bought within one turn. Thus, a bonus of a card can only be used again in the following turn for buying another card. This rule is not yet covered by the CivCalculator, even if multiple cards are selected. In this case you have to be careful and calculate yourself.

Nevertheless the CivCalculator can save a lot of time, so just try it in your next Civilization session. Using the multi-user function you can even use it for all players on the same computer.