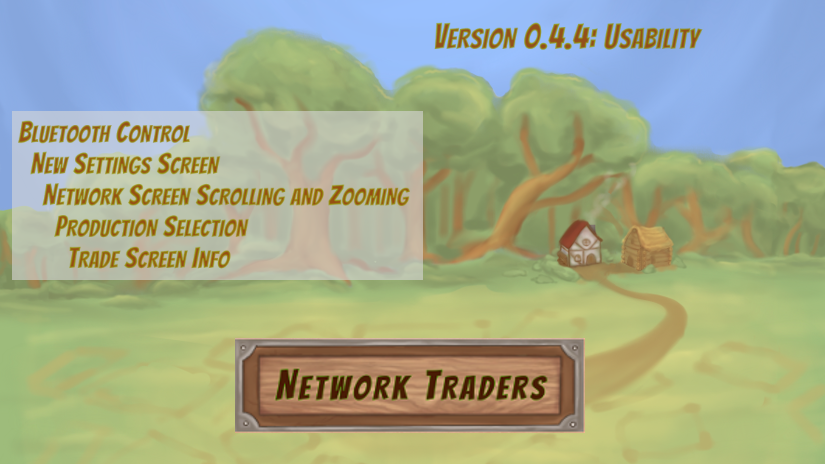 Another release of Network Traders is finally done. The focus of this version, 0.4.4, is usability. It combines various improvements to screen handling and user experience (UX) in general. Continue below to learn more about the details of this update!

From a technical point of view, Network Traders is already on a very good path. In the previous update, I fundamentally changed the networking architecture, resulting in significantly improved stability. Trading is now conducted quite reliably and without noticable delay. On the art side, we made major steps ahead with the new trade screen, resource icons, and buildings.

The issues we tackled now are more concerned with certain behaviours a player would either expect or be annoyed with. For example, the game relies on the Bluetooth device being activated so that trading with other players can be initiated. If the device is not activated, the list of other players to trade with is empty. To fix this, the player firstly has to know that Bluetooth is required, and sencondly turn it on via the smartphone’s settings. This is potentially very annoying, so the game now assists the player. On one hand, they will get a notification if Bluetooth is turned off. On the other hand, the toggle button to turn it on is now integrated into the game. No more looking for the right settings, hence improved usability and more fun.

But Bluetooth handling is not the only thing we improved in this version. Here is what else we worked on:

The current Usability update was an important step towards a first alpha release, but we are not there yet. Version 0.4.5 will introduce a new set of base buildings which will give you more options and change your merchants’ behaviour. So keep an eye on Games:Tech:Blog or just follow me on Twitter if you don’t want to miss any future news!