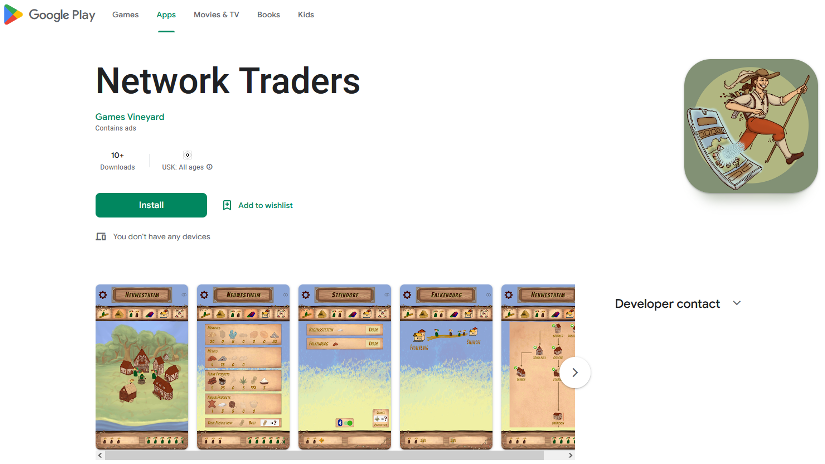 Tomorrow, Friday, September 23rd, the big event will be finally here! The early access (alpha) release of Network Traders on Google Play. Go-live will be at 20:00 CEST (18:00 UTC/GMT). Read the latest news on what I added in the last two weeks, what I did not get done, and what else happened.

When I announced the release two weeks ago, I still had a long list of things I wanted to do. Some of it I actually got done. So, e.g., I finished the data privacy statement which is now available via in-game links as well as the Play Store. The Play Store entry has been rounded off with a few screenshots and a number of bugs were fixed. What did not make it were tooltips on every screen and some in-game ads (but those can wait anyway, I guess I need some players first).

One thing I am really happy about is the beautiful dashboard thingy I built with Grafana. I can now see in real-time the most important data from my game server, and watch how players “pour in” when the game hits the Play Store. Parsing the logs, the dashboard shows the current number of players online, when people trade with each other, and, most importantly tomorrow, when new players are created.

So, what is going to happen on Friday evening 8 pm (in Germany)? I will sit in my living room, together with some friends and family, and press the “release” button. And then – hopefully the game will be available to everyone worldwide for download.

In preparation of this event, I uploaded the second-to-last version of the game more than a week ago already. And that was a good thing, because again, it took more than 4 days for the release to be approved by Google. It could have been 7 days or more, too. In the worst case, the release would not have been ready in time.

The release is now waiting to be deployed, but what will actually happen when I press the button? Note that this is not a production release, but an open test! A production release should be available between 15 minutes and a couple of hours after the release button is pressed. But what about this alpha test release? I hope that there is no difference and that players will actually be able to download the game soon afterwards. But who knows? Wish me good luck!